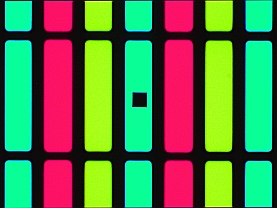 Typical test spectra from three pixels of an OLED display

The organic light emitting diode, or OLED, is a light emitting diode that utilizes organic compounds to emit light.  The basic OLED is made of an a cathode, an emissive layer, a conductive layer, a substrate and an anode.  Placing a charge across the layers causes the emission of photons from the emissive layer by the process of electrophosphorescence.  Different types of organic molecules and different manufacturing processes result in various colors and display designs.

Due to the nature of organic light emitting diode devices, they can be manufactured by a printing process that causes rows of microscopic pixels to be deposited on a surface.  Such designs will lead to the common use of OLED devices as displays and light sources.  Because each pixel is its own colored light source, OLED devices use less power and are smaller and lighter than comparable LED displays.  They also have superior black levels.  As such, OLED displays and light sources are in great demand.

Development testing and quality control of both the components and completed OLED devices are done by optical microspectroscopy.  Microspectrometers, such as those made by CRAIC Technologies, are used to measure the spectra and the intensity of the output from individual pixels and from groups of pixels.  They are even used to map the color and intensity outputs of entire displays.  This is important as manufacturers of organic light emitting diodes need to make sure that all the different types of pixels are the same color and brightness.  A microspectrophotometer does this quickly and easily.

To learn more about microspectroscopy and OLED analysis and testing, select one of the following links: