What is a Spectrophotometer?

How does a Spectrophotometer Work?

The spectrophotometer is an optical instrument for measuring the intensity of light relative to wavelength. Electromagnetic energy, collected from the sample, enters the device through the aperture (yellow line) and is separated into its component wavelengths by the holographic grating. Simply put, the grating acts to separate each color from the white light.  The separated light is then focused onto a CCD array detector where the intensity of each wavelength (or each color if in the visible region) is then measured by a pixel of the array. The CCD is then read-off to a computer and the result is a spectrum which displays the intensity of each wavelength of light.

An example would be a spectral measurement of the visible range which we perceive of as color.  White light would enter the monochromator and be separated into a rainbow of each color.  This rainbow, with blue light on one end and red on the other, would be focused on to the CCD.  Each pixel of the CCD would then measure the intensity of a color.  The results would be a spectrum such as the one shown below.  As shown, the blue pixels emit blue light, the green pixels emit in the green portion of the spectrum and the red pixels emit red light.

Why use a Spectrophotometer? 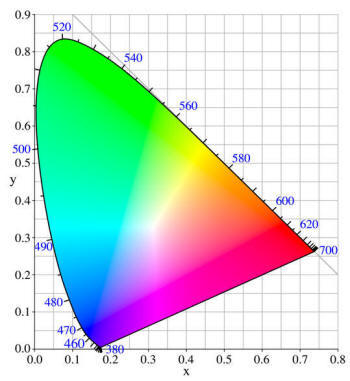 The spectrophotometer allows the researcher to acquire spectra of by illuminating a sample and measuring the intensity of light returned from the sample relative to its wavelength.  With this non-destructive technique, measurements can be made with light transmitted through the sample, reflected from it or even when the sample is made to emit light by processes such as photoluminescence.  The UV-visible-NIR range is especially important as more substances...even colorless ones...absorb in the UV than in the visible and infrared regions. Therefore, a UV -visible-NIR range spectrophotometer is very useful for analysis of most samples for any application.

Spectrophotometers are employed in many different fields and are found in both scientific laboratories and production facilities. In the production environment, for example, they are used for quality control of everything from clothing to the emission of light when producing LEDs.   Spectrophotometers are used by analytical laboratories to identify and quantify microscopic samples ranging from the kinetics, matching colors, the qualification of gems and minerals, the determination of the color of ink or paint by a process chemist. As such, the spectrometer is a highly flexible instrument with many different applications.

The Science of Microspectroscopy 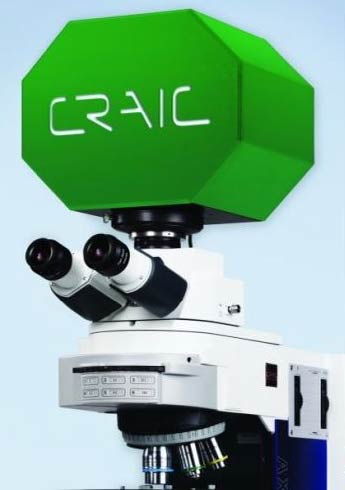